The Philippines is one of the countries in the world that is most often and hardest hit by disasters during, for example, earthquakes and typhoons. It is also one of the countries in Asia with the highest proportion of teenage pregnancies. The sex industry is extensive in the country and generates large sums. The exploitation of children and young people, especially girls, often takes place with the help of social media.

The Philippines is an island nation in Southeast Asia, which became independent in 1946 after being under both Spanish and American colonial rule. Although the country’s economy has improved in recent years, it has not significantly reduced poverty. Over three quarters of the poorest live in the areas most at risk of floods, droughts, typhoons, earthquakes or volcanic eruptions. The vulnerability of the Philippines has a major impact on the well-being, security and future of children and young people. Many children in the Philippines are malnourished. The majority of young people in the Philippines lack education or training and the country has the largest proportion of labor migrants in the world.

One of the most equal countries in the world

In 2018, the Philippines was ranked as the world’s eighth most equal country by the World Economic Forum . It is above all women’s political and economic participation that the country has succeeded well in, thanks to civil society organizations and women politicians. The Philippines was one of the first countries in Asia to introduce women’s suffrage in 1937, following pressure from a strong suffrage movement. Education is also virtually equal. Literacy and level of education are high among both girls and boys. However, major gender equality challenges remain, such as counteracting men’s violence against women and girls in the home . Abortion is criminalized in the Philippines. 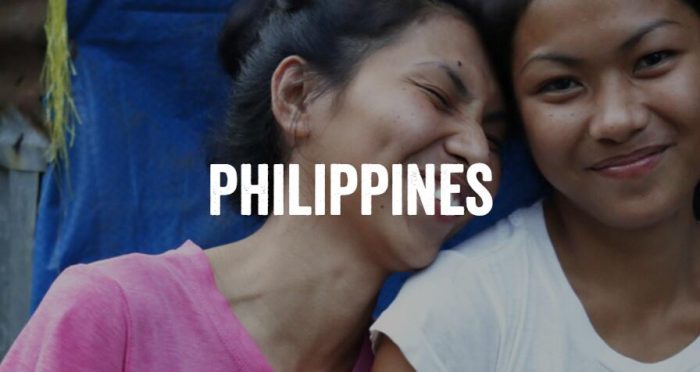 The Philippines is one of the countries where social media is used the most. The global sex industry becomes increasingly digital , allows Filipino children, especially girls, are becoming more vulnerable to be exposed and exploited for sexual purposes. When Plan International conducted a study in 2018, with in-depth interviews with 32 teenagers exposed in the sex industry, it emerged that Facebook is the most common way for sex buyers to access children and young people. We also saw that the biggest underlying reasons for forcing Filipino children, young people and their parents into the sex industry are poverty, social vulnerability and the recurring disasters that Filipino communities are suffering.

Plan International works in the most vulnerable areas to strengthen the rights of all children and young people to survival, development, protection and participation. Among other things, we secure long-term emergency aid through training in disaster prevention measures and reconstruction in the disaster-affected areas. Over the years, we have offered thousands of young people vocational training through our job-creating projects.

Plan International works in the Philippines with the children and young people who are exploited in the sex industry, both preventively and with support and protection. We see that national laws need to be better implemented and that the social safety net for those who are exposed must become much stronger. In the Not for sale campaign , we work for the country’s leaders to take responsibility and make the work against sexual exploitation of children a national priority.

Are my children safe at school?

Have I prepared the kids for the typhoon season? Do my children know what to do if there is an earthquake or landslide? These are questions that many parents in the Philippines have to ask themselves.

To prepare and protect children from disasters, Plan International has developed the Safe Schools program. In Daram, one of the islands of the Philippines that is particularly vulnerable to typhoons and where access to essential services is low, children have learned first aid, to prevent fires and to prepare for a disaster.

– Now I feel confident that I can survive any disaster. I know what to do and how to prepare. If we had not received training, I would not have known what I would do if one of my classmates was injured, says Chay, 17 years old.

Plan International works together with the Ministry of Education, the Fire Protection Agency, the Red Cross and other local organizations to ensure that young people gain the necessary knowledge about disasters. Chay is one of more than 200 children and young people who participated in the three-day training camp.

– As early as possible, we must prepare the children so that they know how to protect themselves and so that they can get through the shocking and stressful situation that a disaster entails. Especially now that the effects of climate change are beginning to be felt more and more, says Arnold Peca. He is the father of three children and project manager for Safe Schools at Plan International.

Emily got a job at a restaurant

Vocational training has opened up new opportunities for me. Now I have a job that provides food on the table and that allows me to send my sister to school.

It tells the young waitress after she finishes her workout at the restaurant. Emily is one of many young people in the Philippines who have long had difficulty finding a job. In collaboration with the consulting company Accenture, Plan International has mapped the knowledge and skills that are in demand in the labor market in the Philippines and helped young people to acquire these skills through vocational training.

I was not aware that we young people have the right to be heard and to express our opinion on decisions that are made. I felt invisible. Therefore, it is like a dream to stand here today and tell my story.

In front of decision-makers from the EU and the UN, 17-year-old Hannie told about how she became a youth reporter through Plan International’s project. The project provides young people like Hannie with education in children’s rights and in photography and filming. Then they can themselves convey young people’s voices to the rest of the world and information about children’s rights to other children and young people.

Facts about the Philippines